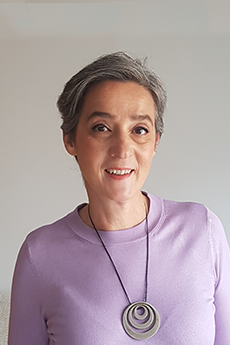 Experience:
Dr. María Ángeles Alonso has served as Resident Director of the GW Madrid program since 2018 but she has been working for GW Madrid since 1991, when she started as a postgraduate intern and continued as an Assistant Director (2002). As a Spanish Language professor, she teaches one of the language courses for GW students. From 2011 to 2019 she also taught regular courses at Universidad Autónoma de Madrid (UAM) as an Associate Professor in the Spanish Philology Department. She has lived in Hungary and in Serbia, where she taught Spanish at Belgrade and Szeged Universities.

She graduated from UAM and obtained her Master specializing in Teaching Spanish as a Second Language. She earned her doctorate degree in Spanish Language and General Linguistics (2015) and obtained a Summa Cum Laude mention for her doctoral dissertation. Her main research fields include the analysis of learners’ errors in Spanish as a Second Language and the methodology of teaching second languages, as can be seen in her publications. Additionally, María  Ángeles Alonso is coauthor of the book Las preposiciones (2011) on how to learn the use of Spanish prepositions. As a lecturer, she regularly participates in the “Course for professors of Spanish as a Second Language” offered by UAM every summer. Since 2013 she has served as an Organizing Committee Member of the “Coloquio UAM de español como lengua extranjera”.

As a Resident Director, Dr. Alonso is focused on keeping the Madrid program current so that students can make the most of their stay in Spain. In addition to providing everyday support, her program goals also include giving students a challenging academic offer, a unique homestay experience and enriching cultural activities and trips. As a member of APUNE (Association of North American University Programs in Spain), she participates in their meetings and trainings activities.