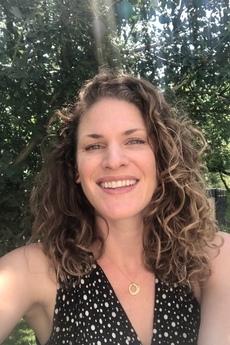 Lise-Anne Strohschänk serves as Resident Director of the GW Chile program. She has been in her position since the program was launched in 2006 and has helped shape it over the years. As students' main point of contact during their time abroad, she provides their initial on-site orientation, organizes group activities and supports them as they navigate the cultural adaptation process. A key part of her role is guiding students in the realm of academics, drawing on her years of experience to walk them through the add/drop process and help them select appropriate direct-enroll courses at the program's two partner universities. She also places emphasis on helping students maximize their time abroad with a set of group workshops held throughout the semester, which include goal-setting and active reflection activities.

Lise-Anne earned her Bachelor's degree, Summa Cum Laude, in Hispanic Studies at Macalester College in St. Paul, Minnesota, spending her semester abroad in Chile. After completing her B.A. she returned to Chile and went on to earn her Master's degree in Latin American and Chilean literature at the Universidad de Chile, writing her thesis on the Latin American literary canon and Dominican literary critic Pedro Henríquez Ureña. Both during and after her studies, she taught English and Spanish and did translation and editing work before beginning to work in the field of study abroad, initially at Facultad Latinoamericana de Ciencias Sociales (FLACSO).

In her time at GW, in addition to general program development and management, her responsibilities have included regional oversight of programs. She is an active member of APICH (Asociación de Programas Internacionales en Chile).

Interesting Facts:
Lise-Anne grew up as a third culture kid in the U.S., speaking French and German at home with her parents, and would spend a semester living in a small town in the Bavarian Alps every few years. She has two Chilean-American daughters and enjoys baking and yoga in her free time.